The beginning of 2021 brings us new hopes for a return to normality. We thank you for the trust you have placed in us. We are always here for you! With the continued rapid progress of vaccinations throughout Europe, including Poland, the return to freedom to travel is getting closer. Current travel offers, travel information about Poland and other Eastern European countries, the "New Opening Special Offer " with special conditions for individual guests and small groups can be found by clicking on this text. We are looking forward to seeing you!
Your Marco der Pole Team
You are at: Home» Central & Eastern Europe»Baltic States Tour

The Baltic countries of Lithuania, Latvia, Estonia are all so different and yet have so much in common. They have different histories, different languages, different customs, but what they have in common are beautiful cities, the most beautiful cities of the Baltic League of the Hanseatic League, an interesting fascinating history and nature. The architectural pearls of the Baltic States, to name but a few, are the Old Town of Vilnius, the Art Nouveau style in Riga, numerous castles and palaces such as Rundale Castle in Latvia, the Pyrite Monastery in Tallinn or the castles of Sigulda and Turaida on the banks of the Gauija River. The fascinating history of this region ranges from the Middle Ages through the conflict-ridden 17th and 18th centuries to the modern history of the 20th century. It includes the tragic period of German occupation, the destruction of the Jewish community and, after 1945, the dark and tragic almost 50 years of Soviet occupation. But it is also a story that ends happily - with independence in 1988-1991.
The Baltic Sea offers pure nature, including one of the most beautiful national parks in Europe, the Lahemaa National Park in Estonia, the Gauja River with its national park in Latvia, numerous national parks in Lithuania or the shifting sand dunes of Nida. The rich culture includes architectural highlights such as buildings of wooden folk architecture, folk customs and traditions as well as great culinary specialities of the national cuisines.

What is always most important in our travels are interesting people. The Balts have produced journalists, writers, witnesses of history with their interesting but often dramatic episodes, artists with their passions and simple people. But they are all extremely open, friendly and interesting.Many of them, and this is one of the peculiarities of the Baltic States, sing with passion and love. Historians like to use the metaphor that the Balts "sang" their way to independence in 1991 as part of the Singing Revolution.

Once the poet Cyprian Kamil Norwid wrote "Where you hear singing, there people have a heart. Bad people, believe me, never sing".
Lithuania, Latvia and Estonia - the three jewels of the Baltic States.

We invite you to discover them with us. 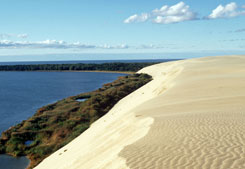 The complicated history meant that German, Scandinavian, Russian and Polish influences can be felt in a very small area. Religious diversity - Protestant, Catholic and Orthodox culture - has also left its mark. The Baltic States are characterised by a rich and diverse history, culture and a wealth of traditions. With us you will experience a fascinating journey through the Baltic countries.
Route: Vilnius - Trakai - Riga - Jurmala - Tallinn - Helsinki - Tallinn
Duration: 8 days/7 nights