The beginning of 2021 brings us new hopes for a return to normality. We thank you for the trust you have placed in us. We are always here for you! With the continued rapid progress of vaccinations throughout Europe, including Poland, the return to freedom to travel is getting closer. Current travel offers, travel information about Poland and other Eastern European countries, the "New Opening Special Offer " with special conditions for individual guests and small groups can be found by clicking on this text. We are looking forward to seeing you!
Your Marco der Pole Team
You are at: Home» Central & Eastern Europe»Czech Republik

There are no more different neighbouring nations than the Poles and the Czechs. The Czechs are a small nation characterised by order, prudence, self-irony and it is the country with the highest number of ateists in Europe. This is the image held by the Poles who see themselves as opposite to the Czechs: a large country, an old-fashioned, romantic, too serious and religious nation. On the one hand, we are subjects of jokes and stereotypes for each other but on the other hand, the Poles love Czech literature, film and sense of humour. The authors and directors from the Czech Republic seem to be even more popular in Poland than in their home country. And to top it all, it has beautiful cities and towns which were not damaged in the WW II and which may be the object of jealousy for anyone who has visited this charming country at least once. 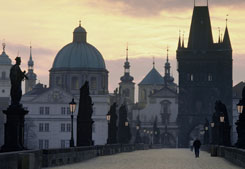 Prague - gold, fairytale, legendary, mysterious. Imperial, aristocratic, bourgeois, plebeian. All in one. Discover Prague and get lost in the labyrinth of streets and meanings.
Duration: 5 days/4 nights 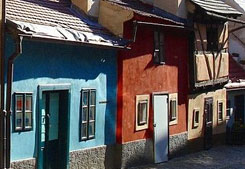 Around Bohemia and Moravia. Round trip in the Czech Republic